We invite you to join the GWSW proposal-writing community to receive the latest funding agency updates, grant proposal writing tips and Q&A, information on how to write high-impact research manuscripts, and more. 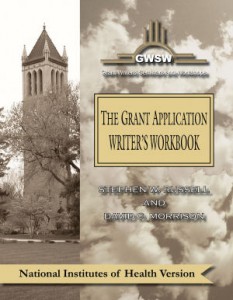 At virtually every Biomedical Publication Seminar I present, attendees line up during breaks to seek my input on conflicts they are currently facing regarding authorship. Thus, if you find yourself struggling to decide who should or shouldn’t be included as an author of a manuscript, you’re not alone.

Vera-Badillo et al. (Eur J Cancer, 2016) recently investigated the issue of Honorary and Ghost Authors of manuscripts describing results of randomized clinical trials, and found the problem to be pervasive. Honorary Authors, defined as authors who do not meet recommended authorship criteria, were included on approximately 1/3 of the manuscripts reviewed. Nearly 2/3 of the manuscripts reviewed involved Ghost Authors, defined as individuals who contributed substantially to the paper, but were not listed as authors. The findings for Honorary Authors were comparable to those of previous studies addressing this issue; 15-30% of published manuscripts typically include Honorary Authors (Wislar JS. BMJ, 2011; Basford JR. et al. Arch Physical Med. Rehab 2014). The Vera-Badillo study reported an inordinately large number of manuscripts with Ghost Authors, however, because many manuscripts in their sample utilized paid professional writers who were not identified as authors; this latter scenario is relatively common with industry-sponsored clinical trials. Results of previous studies have shown that only approximately 10% of published manuscripts had Ghost Authors.

When comparing results of different studies on this issue, you should keep in mind that the studies themselves may have used different criteria for what justifies authorship. This can markedly impact results. For example, if one study determined that a paid professional writer should be included as an author, then they would be counted as a Ghost Author if they were excluded. If another study did not consider this contribution sufficient to merit authorship, then this individual would be counted as an Honorary Author if they were included. So, if scholars investigating this problem disagree on criteria for authorship, how can you resolve potential conflicts involving your own manuscript(s)?

Fortunately, guidance is available. Most importantly, the International Committee of Medical Journal Editors  recommends “that authorship be based on the following 4 criteria:

–  Substantial contributions to the conception or design of the work; or the acquisition, analysis, or interpretation of data for the work; AND
–  Drafting the work or revising it critically for important intellectual content; AND
–  Final approval of the version to be published; AND
–  Agreement to be accountable for all aspects of the work in ensuring that questions related to the accuracy or integrity of any part of the work are appropriately investigated and resolved.”

Greatly enhanced insights regarding these broad criteria can be gained by reading the Position Paper by Edward Huth (Annals of Internal Medicine, 1986). The perspective gained by reading this paper can be invaluable, as the criteria presented should be used as guidelines, not mandates. Thus, authors must develop their own views on how to interpret and apply these criteria. To emphasize this point, a random sampling of 600 journals from the Thomson Reuters database revealed that although nearly 2/3 had an established authorship policy, only approximately 5% of those with a policy required authors to describe the nature and extent of their contribution (Resnik, D.B. et al. J. Med Ethics, 2016). Thus, authors retain substantial latitude in identifying who should be included as an author of their manuscript.

Once you’ve identified the authors to include, the order of those authors must be determined. Generally, the first author should’ve made the most significant contributions to the work described, and been intimately involved in writing and reviewing the manuscript. The last author is usually the most senior individual who provided guidance, and often financial support, for the project. The order of middle authors is not likely to impact the careers of those authors, and thus is relatively unimportant. Consequently, if disputes arise regarding the order of middle authors, this concept should be communicated to reduce tension. Occasionally, a situation arises in which more than one individual contributed to a study at a level justifying first authorship. In this instance, an option for joint-first authorship, in which a footnote is included to indicate that the first two (or more) authors contributed equally to the manuscript, is a reasonable solution. This approach is becoming widely accepted (Conte, M.L. et al. FASEB J, 2013), and some journals have begun bolding the names of co-first authors in their list of references (Omary M.B. et al. J. Hepatol, 2015).

Chris Papasian presents the GWSW Seminar Writing and Publishing High-Impact Research Manuscripts and is coauthor of our workbook, Writing for Biomedical Publication. He is currently Professor and Chair of Biomedical Sciences at the UMKC School of Medicine, and Editor of the ASM journal, Clinical and Vaccine Immunology.